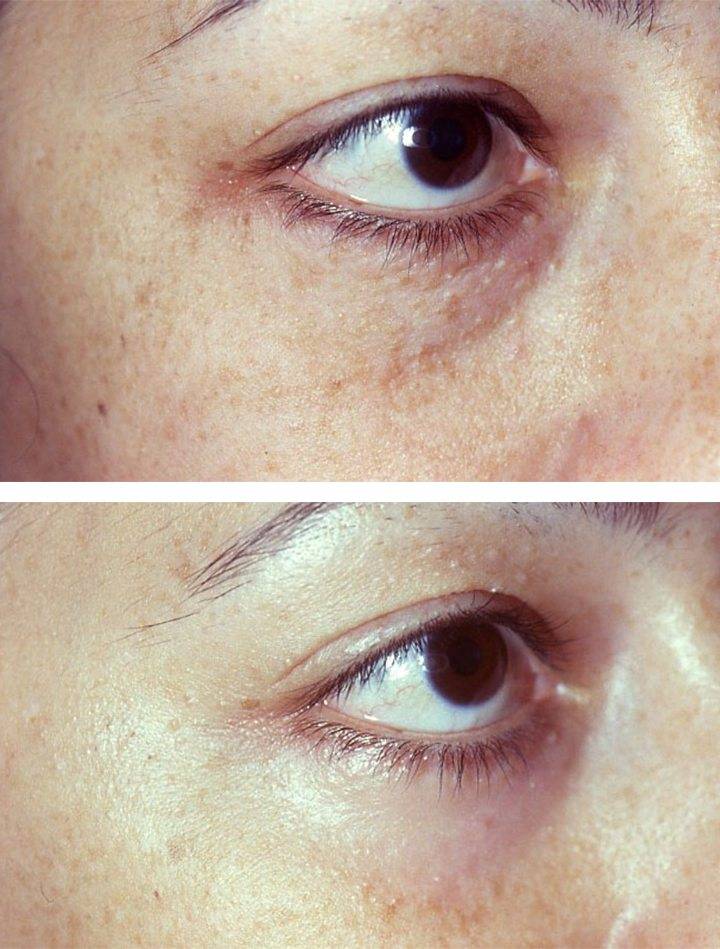 Syringomas are small, round flesh-coloured bumps, most commonly found around the eyelids. A syringoma forms when, for unknown reasons, there is an overgrowth of cells within a sweat gland duct. The duct becomes enlarged by and clogged with the extra cells, forming a hard round bump about one to three millimeters in diameter.

Syringomas are benign and completely harmless and should not itch or cause pain. They typically occur in clusters on both sides of the body and are usually symmetrically distributed. Though they most often appear below the eyes, they also can form elsewhere on the face, in the armpits, on the chest or lower abdomen, or on the male or female genitalia. Syringomas can affect just about anyone at any age, but they are more common in women than in men, and arise most frequently during adolescence and at midlife.

How can syringomas be treated?

In order to completely remove them, the treatment has to penetrate the deep dermis.  Superficial treatments such as shaving, acid peels and superficial electrocautery will plane down the surface, but will not remove the growth from the deeper layers.

At Áda Aesthetic Medicine we use ablative lasers to target the small gland under the skin. We have the choice of KTP laser, carbon dioxide laser or erbium laser. The decision as to which laser would be best is made by your doctor after assessing the size, number of bumps, and your skin type.

What are the risks?

Some of the potential risks from laser treatment are:

Is laser the best treatment?

In experienced hands, laser can give very good cosmetic results.  The lasers are easier to control compared to cryotherapy or trichloroacetic acid treatments, hence the risks of side effects is reduced. At your consultation with our doctors we will discuss your concerns and expectations in depth. We will discuss a treatment plan and determine the best course of action for your unique condition

If you have any skin condition you would like examined, please contact our friendly team on (02) 9552 1442 or book a consultation here.

Do you have a question?

The friendly team at āda aesthetic medicine looks forward to meeting you. Contact us today at one of our clinics or enquire online.

Our Glebe practice is easily accessible by train and bus. There is metered street parking available.

Dr Peter Muzikants only travels to Wollongong twice a month and takes consultations there on Thursdays. If you'd like to request a consultation in Wollongong, please ensure you select the right location when enquiring.

Wondering how much injectables cost?

Download our free guide to find out; the costs involved, common measurements required, a comparison of providers, and much more!